After awaking in another airport, we were ready to accomplish two main goals today:
1) find our hostel
2) get our visa

Hong Kong and Kowloon are relatively small regions making it easy to navigate. We found our hostel with ease and were warmly greeted by the nice Filipino receptionist (I'm surprised at how large the Filipino community is here).  HOSTEL = CHECK!
! After refilling the wallet at a currency exchange (there is no shortage of them), we refueled  at a vegetarian restaurant for lunch, and then headed to the Visa office. At the China Resources Centre, we waited about 20 minutes outside and then 15 minutes inside. The process was surprisingly fast and easy -- ugh, I wonder why Toronto could not have been like that. With our hostel booked and visas in process so much weight (literally -backpackers bags are heavy! and metaphorically- the visa situation was getting me kind of anxious) was lifted. All we could do was relax. :) VISA = CHECK!

We met up with Catherine's friend, Eric, once more for dinner.
We had amazing food and while we were eating, Eric sneakily went to the washroom and paid for the meal. Honestly, all these nice people we meet! I.O.Us are most definitely in order.

No comments:
Email ThisBlogThis!Share to TwitterShare to FacebookShare to Pinterest
#HASHTAG: #itgetsbetter, #touristystuff

My mom emailed me in the morning to notify me about the current weather situation in Hong Kong and Beijing.There had been some major flooding in Beijing, our stopover, that caused 30+ deaths in rural Beijing. And apparently, a level 10 typhoon hit Hong Kong, our destination.  The last time the typhoon was that bad was in the 90s. So ya, I was a little worried.

We boarded our first flight from Tokyo to Beijing. No problems.

Plane was kinda old school and breakfast was meh. Eggs, wedges, fruits, and yoghurt. I missed Japanese food already. Entertainment-wise, we watched the  Taiwanese movie, Ai. I remember first seeing the promotional picture back in Beijing and saying, I wanna watch that movie. A lot of time had past but I still did not forget about the movie. In fact, everytime I saw anything related to the movie I got excited. It was the medley of different actors that appealed to me. Not to mention it was also a pretty poster. I thought it would have been a Taiwanese version of He's Just Not That Into You or Valentine's Day.
Verdict: 6/10. Not satisfied. Storyline wasn't exciting. The relationships were okay. Nothing all too memorable. My expectations were too high.

Upon arrival on the mainland, we found out that we would be delayed for a few hours. The airline provided us with food that was worst than the school cafeterias.
Ugh, with that wasted time we could have gone back to the residence to see the family. There were free phones in the terminal that allowed you to call anyone in Beijing, so I took advantage of it and called up a few friends. They're definitely missed and so it was good to hear from them after a long day of travel.

When we finally got on the plane hours later, we were pleased to find a proper entertainment system with lots of choices...and American TV shows galore! How I Met Your Mother, New Girl, Adventure Time, Parks and Rec. I also watched a Hong Kong movie called A Beautiful Life (which made me cry at the end). Much better than Ai. Movies and wine on a plane - not a bad way to relax after this bumpy road.

Because of the delayed and cancelled flights, the airport parking lot was busy so we had to wait an additional hour on the plane before unloading. By the time we got out, it was dark and still raining. Did not want to step out into the night time terror, sooo we decided to spend another night in the airport.

It was our last day in Japan. While Kristie went to the robot museum and Cat went to the Imperial Palace, I slept in to recuperate. Night buses, although good for budget travellers, aren't the most comfortable thing.

I did a bit of window shopping myself until reuniting with the girls at Ueno for out last night out in Japan. Before going shopping, I went to the bank to get some moolah. It was very efficient, people were very helpful (and spoke English!), and it felt very safe.
For our convenience, we spent the evening at the airport for our flight back to Hong Kong. Yay airport sleepovers!

No comments:
Email ThisBlogThis!Share to TwitterShare to FacebookShare to Pinterest
#HASHTAG: #culture, #foodforannie

Day 15
Youth dressed in exuberant colours, frilly frocks and hair pieces flock to Harajuku on weekends. The Harajuku fashion was made popular to the western audience by Gwen Stefani and her entourage of Harajuku Girls. In the stereotypical North American high schools, you've got your "freshmen, ROTC guys, preps, J.V. jocks, asian nerds, cool Asians, Varsity jocks unfriendly black hotties, girls who eat their feelings, girls who don't eat anything, desperate wannabes, burnouts, sexually active band geeks," etc etc. In Japan, you've got your harajuku girls as one of the many subcultures in youth culture. High school students in Japan wear uniforms, and so weekends are the optimal time for them to express themselves in their funky fashion.

On our journey to find the Harajuku girls:

We saw a parade of colour so we followed them hoping to get to the famous Harajuku bridge where adolescence hang out in their sweet costumes.  They ended up taking us deep into the streets of harajuku with speciality stores filled with lolita things, vintage boutiques, Americanized shops, galleries, and cafes.  They stopped for a short photoshoot and then dispersed. 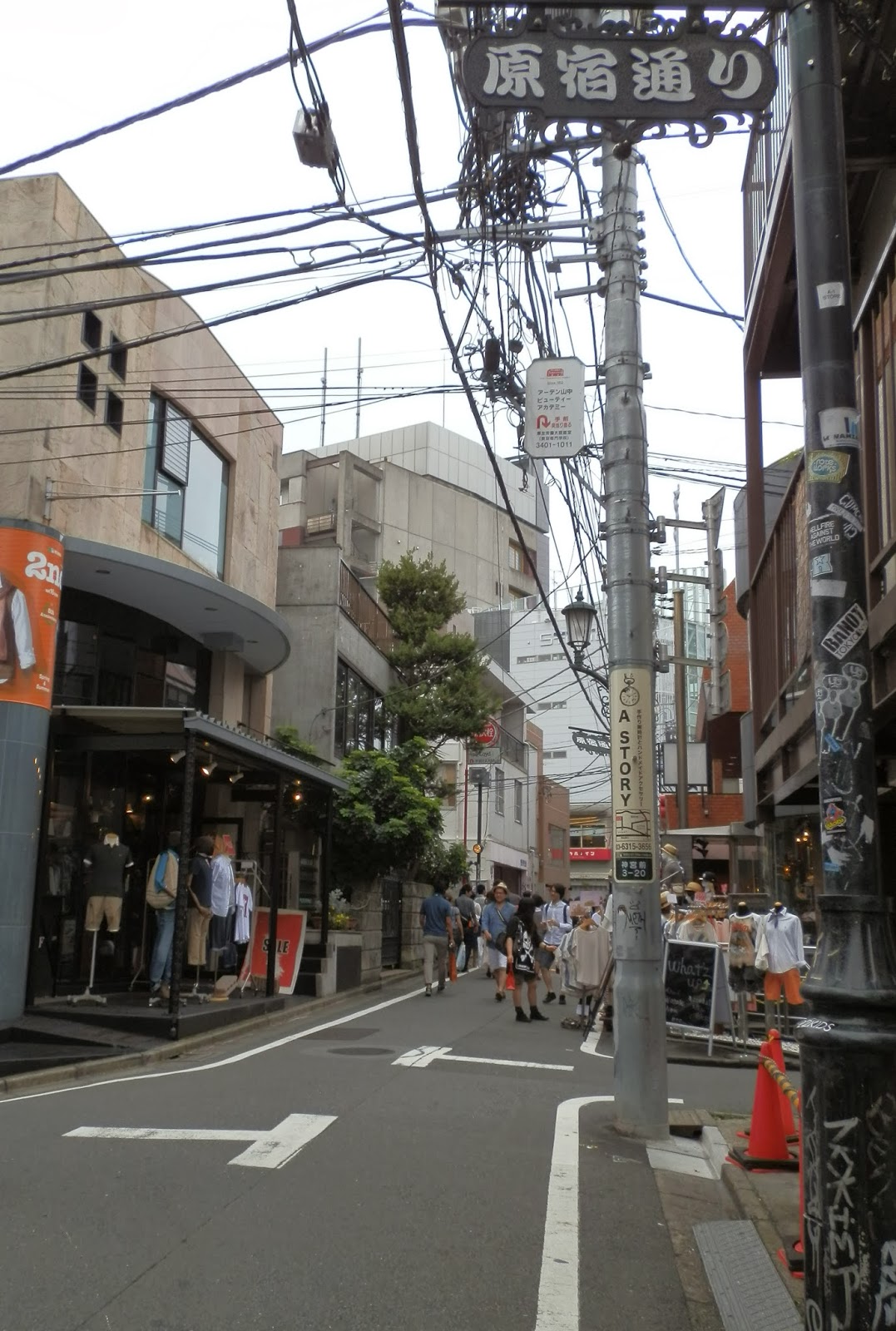 We eventually found our way to the Harajuku Bridge but unfortunately there were no costumed people on the bridge at that time but at least we got to see the parade. But anyways, next adventure! Yogogi park!

On Sundays, Yogogi Park is a place where entertainers and friends gather to put on shows for anyone who is willing to listen/watch. Kinda like buskers, except they don't do it for money.

Its also just a really nice play to chill and blow bubbles.

The park attracts many foreigners as well. Here are three of them: